Our first day was very foggy.  You’d expect that I’d be in Fog Heaven but strangely I did not go out at all until we decided to ride around in the afternoon.  As an excuse it had rained off and on but I did bring the tripod umbrella so that’s pretty weak.  We covered a few miles when passing Sargeant Drive which runs along Somes Sound and was hidden in fog.  Not much attracted attention until this tree appeared. 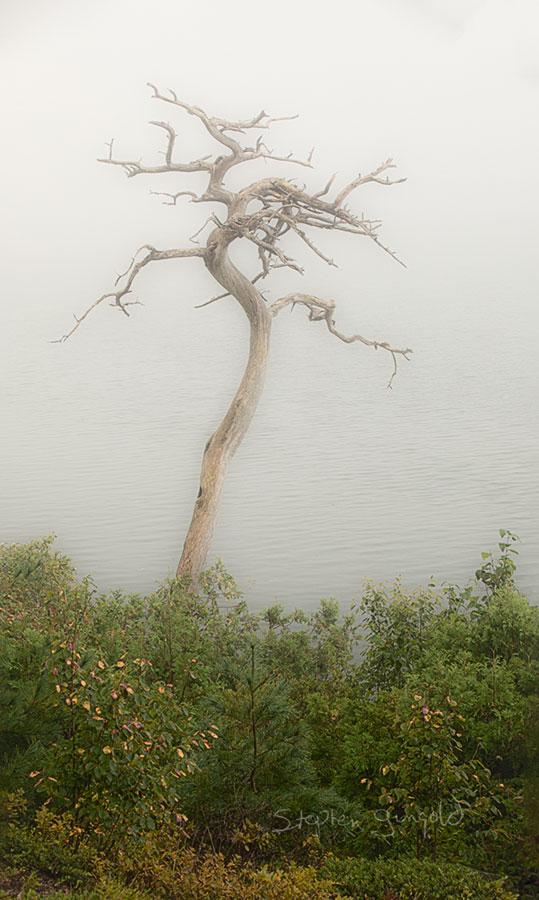 Probably the best angle to separate the branches would have been from the water but the shapes still express themselves here. Originally I thought this would be best in monochrome but the black and white conversion didn’t work for me.  And I do like the softness of the colors. I haven’t decided whether I would have liked a bit more fog but losing the details of the branches would have made the image less successful, I think.

I am a Nature Photographer with interests in all things related. Water, flowers, insects and fungi are my main interests but I am happy to photograph wildlife and landscapes and all other of Nature's subjects.
View all posts by Steve Gingold →
This entry was posted in Intimate Landscape, Landscape, National Parks, Nature Photography, Patterns in Nature and tagged Acadia National Park, dead tree, fog, foggy landscape, intimate landscape, landscape, Maine, New England, Northeast Harbor, Sargeant Drive, Somes Sound, tree silhouette. Bookmark the permalink.