I went on another bullfrog safari yesterday.  It was a little successful but they are still a bit behind schedule due to the cool mornings we’ve been having.  I’ll share one or two on FF.

Once I accepted the dearth of Lithobates, I walked the road looking for dragonflies and damselflies. That was a little more successful and I saw two new species I had not before. Today’s post is a Frosted Whiteface female on a stalk of cinnamon fern fertile frond. The perch was on water’s edge and I could not get a ventral view to show the white of its face so just the dorsal view. 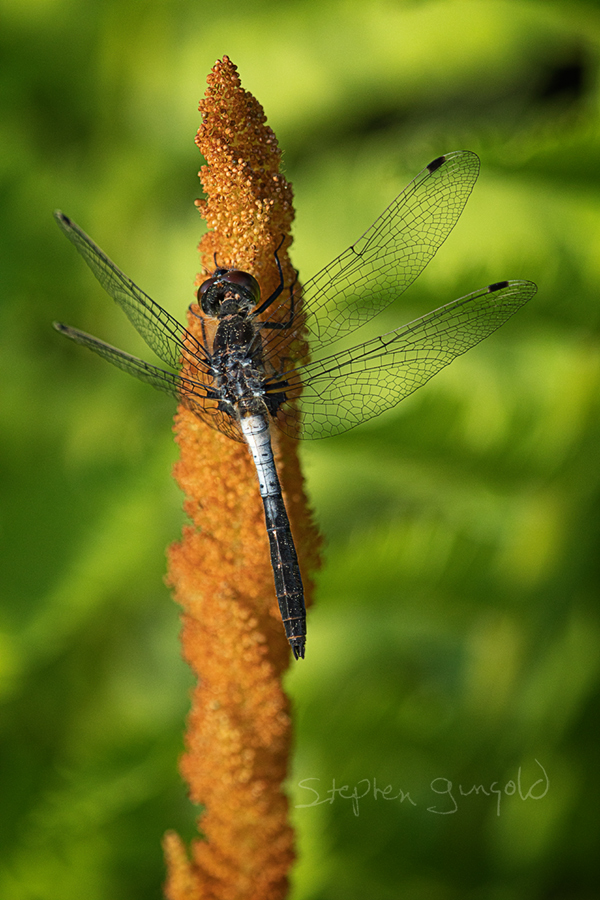 I had been shooting the frogs that I was able to find with my 100-400 and the doubler for 800mm. I felt the 180 with its doubler would capture better detail so switched to that for this and a few other images. It did do a better job.  But…a few minutes later the “eventful” part of the title made me wish I had not changed.

I was, after all, at Moosehorn Pond and for the first time in the 10 or so years I have been visiting there it finally lived up to its name. 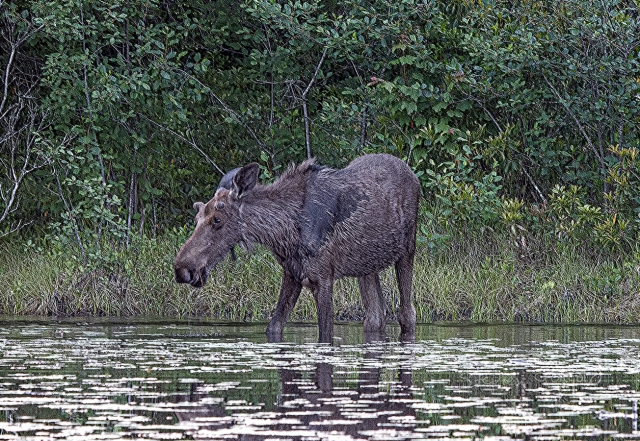 These are not very good shots.  There were two males, this one with some cute little horn nubbins, A macro lens, even with its doubler, doesn’t cut the mustard with wildlife at a distance. At least my ISO was high enough to get a good sharpish exposure time but the crop I needed really didn’t allow for sharp details. Lots of Photoshop work to make these worth viewing.  But…it is evidence of a sighting and better shots than the other day’s bear encounter. After these two shots I decided to carefully and slowly get off my knees (the position for photographing the dragonfly) and walk back to the car for some longer glass. Maybe I should have crawled.  Once I stood up Mama came out of the trees, gave me a quick stare with her ears straight up (a pose of alarm), and then ushered the young ones into cover.

All in all, a good Sunday with some frog, moose, and ode sightings.